30 Years Since the Fall of the Wall

This piece was originally published by the American Council on Germany on June 10, 2019.

2019 marks the 30th anniversary of the fall of the  Berlin Wall, setting into motion the unification of Germany. To recognize the significance of this historic event, each month the American Council on Germany will feature individuals as they reflect on life before and after the fall of the Wall.

In the spring of 1990, Andrew Frank, (1997 ACG Young Leader) Founder and President of KARV Communications, found himself in East Berlin. In this story, he reflects on how that day continues to influence him.

I wrapped up the last day of the seminar that took me to Budapest, Bratislava, Prague, and Warsaw organizing democracy and election training in former communist countries. I said goodbye to about 20 political consultants and the staff of Campaigns & Elections magazine (the sponsor) then I drove with my college buddy Todd from Warsaw for eight hours overnight to make sure we would get to Berlin to see what was happening in the first free and open election in East Germany – one that would unify the country.

We arrived in Berlin in a car Todd had rented a week earlier from Leiden, Holland, where he was going to law school. Driving in East Germany, we actually ran out of gas and had to wait for assistance. “E means empty in any language” was what Todd and I said to each other!

When we got to Berlin we went directly to Checkpoint Charlie. We showed our passports and drove through. We parked the car somewhere and I remember we walked all over for hours, looking at the pieces of the Wall and the “no-man’s land” areas of the two sides of the city. In some parts there were openings chiseled out, and in other parts the concrete towered above and stretched as long as we could see.

Then we went to the Brandenburg Gate. There were hundreds of people singing, walking about, and standing on the wall. You would have thought it was a holiday. 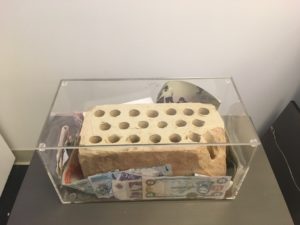 The Wall at Brandenburg Gate had been knocked out in many places, and by the time we got there in March 1990, months had gone by since people had started to take pieces away. We could see orange bricks under chipped concrete. We found out the bricks had been put up quickly back when the Russians and East Germans hastily and methodically started to confine their citizens. Concrete was then poured and molded on top and extra layers of security were subsequently added. People had hammers and picks, and someone lent us a set (I don’t recall we paid anyone to borrow them but it seems likely). Todd and I both chiseled out a solid brick, something I have to this day. It was a special moment.

When we got back into our car, we decided that we should drive back to the eastern side and try to go back in and out, just to see what the guards would do. For some reason at the one checkpoint there were not a lot of cars, and I don’t recall waiting that long each time we crossed, but we did it at least four times. In fact, the last time we did it, we brought a few girls crammed into our car from the eastern side to the west.

The guards from East Berlin looked at our passports each time, but it was unclear what they were looking for or could do. Their job didn’t have a function anymore. The same young guard who had looked at us the previous time saw us with the car full of people, stopped us and talked to some others, trying to figure out if he should let the people go with us – but what was he to do?

That day was the first day of a new Berlin and a new Germany.

I think about that guard whenever I go back to Berlin. What did he think about that night, the previous weeks, and what had happened to his Communist home? What job did he get after unification? Is he happy with what happened 30 years ago?

I didn’t go back to Germany again until the summer of 1997, when I was selected to be in the ACG’s Young Leader program. The difference in Berlin in the seven years was incredible, with construction happening all over the city. During the next four years I had occasion to go to Germany numerous times, as I was working on Holocaust asset reparations negotiations. Our meetings were mostly in Bonn, but in 2000, as the government ministries started to move to Berlin, we met there. The cranes are still embedded in my memory.

Today, it is hard to tell East from West if you don’t look for the right things – construction new and old in the middle of the city that is different from only 10-15 blocks outside. It has become a world-class city of art and culture and a melting pot of races and religions.

Having a brick from the Wall – and seeing it every day on my desk – reminds me of a great time in my life 30 years ago, but also of the struggles of so many – not just in Berlin but throughout the Eastern Bloc. It also serves as a reminder to me that so many other people around the world today are still “behind a wall” and need to find a way to be free.