Thinking Forward: Preparing for U.S. Election Turbulence – with Jack Devine, Founding Partner at The Arkin Group and former Acting Deputy Director of Operations at the CIA 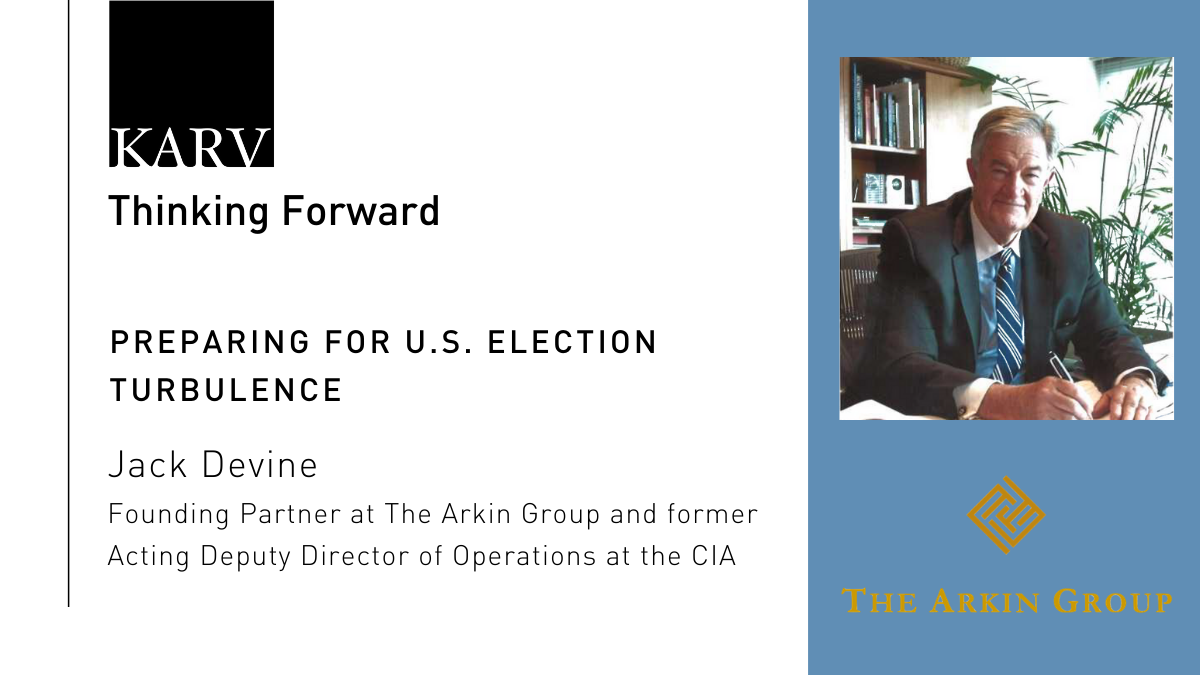 Since the onset of COVID-19, KARV Communications has remained in close contact with members of our global network, including industry leaders who are thinking beyond the immediate impact of the pandemic and focusing on strategies for emerging and thriving in a new business landscape. Soon, the global business community will also face the impact of a U.S. election with historic consequences, potential delays in the announcement of results and fears of civil unrest. Leadership at this time requires evolved approaches to implementing adaptive strategies.

One week out from election day, we spoke with Jack Devine, a Founding Partner at The Arkin Group and former Acting Deputy Director of Operations at the CIA, about how businesses should be preparing to navigate this moment of great uncertainty as well as the ways the pandemic has shaped this election and how these changes may reverberate through future election cycles.

Q1: How has the pandemic impacted the way candidates campaign and communicate with voters and the election process itself? How much of this change do you expect to carry forward to future elections?

Obviously, the pandemic has shifted campaign strategies for the 2020 election, but most traditional public political activities will return once the pandemic is under control. There has been a major pivot by candidates to utilize digital tools for communication despite some campaigns insisting on a veneer of live public engagement. National political ad spending is expected to hit $11B this cycle, 50% higher than 2016. Social media is playing an even larger role now.  In 2016, Facebook said it received a combined $81M from the Clinton and Trump campaigns, but records show the Trump and Biden campaigns have already spent almost $200M on that site along with another $120M on ads with Google. Beyond the paid online material, there has been continued growth in organic or semi-organic political content. This has created a real opportunity for malign influence through the spread of misinformation. So much of the focus after 2016 was Russian interference, but a huge portion of false material was spread by credulous Americans. The 2019 Senate investigation showed that only $100,000 in paid ads could be traced back to Russian interests, but researchers found that nearly 30 million users passed along foreign-sourced disinformation.

As for legitimate activities, eventually, candidates will return to larger in-person meetings and rallies on the trail. Politics and politicians don’t change overnight, especially when you consider the large population of people not engaged online. Studies show 70% of U.S. adults use at least one social media site, but most don’t use them more than once per day. Facebook and YouTube are used by less than 50% of those 65 years or older while no other major social media site attracts more than 15%. Until a larger part of the voting public becomes more “online”, traditional forms of campaigning will remain important. Politicians will engage in the door knocking and baby kissing that we’ve known for generations. Having said that, 2020 will hasten behind-the-scenes changes as campaigns focus more resources on targeted, digital fundraising and advertising.

Q2: Looking ahead, what additional changes or innovations do you anticipate around campaign and election infrastructure and processes over the next five years? Ten years?

As President Trump and Vice President Biden have shown, you can create and maintain vast fundraising operations through online stores and digital communications. Microtargeted advertising through social media and other online sources will continue to grow more sophisticated as AI-assisted tools become more readily available. Although Cambridge Analytica’s illicit harvesting of Facebook user data for campaign advertising created some public backlash, there are still no online-specific regulations for targeted political messages.  Google and Twitter have voluntarily instituted policies, but as we’ve seen in just the last few days, these rules are not set in stone.

On the institutional side of things, this election will hasten the decline of in-person voting. Mail-in voting will soon become nearly universal. Eventually, as the average American’s life becomes more digitally mediated and online security improves through innovations like blockchain, online voting will become a more palatable option across the country. Any significant security breaches could delay this move, but the change is inevitable.  As we move away from in-person voting, automated processes will increase in other parts of the system. Automatic voter registration will become the norm, as will more precise automated tools for maintaining accurate voter lists.

Q3: What should companies be doing now to prepare for any potential civil unrest or other issues in the aftermath of the election?

This is potentially the most contentious election of this generation due to the uncertain outcome and COVID-19-related difficulties in voting. There could be some civil unrest if one candidate appears to win on election night, but mail-in votes change the results. Keep in mind that the battleground states of Pennsylvania, Iowa, Ohio, North Carolina, Nevada, and Minnesota all have ballot deadlines three or more days beyond election day. If the eventual numbers are close, there could be short-term unrest. National security and police infrastructure are robust enough to not let this get out of hand. The U.S. is well-positioned to handle protests or other disruptions after the election, and our political institutions will prevail. Due to the level of uncertainty of the election and citizen response, it is essential that companies have well-practiced emergency plans including protection of people, information, and physical facilities.

Businesses should be reviewing possible vulnerabilities before the election. At a basic level, companies need to identify whether any offices or personnel are near potential protest sites, such as vote counting facilities or relevant county offices. Remind staff to check local news and law enforcement notifications for protest activity. Law firms should consider reinforcing or at least reviewing the security of digital communication systems if any staff will be involved in possible legal actions after the campaign. Similarly, companies working in finance and sensitive research fields should ensure their systems are prepared against malicious activity. Foreign and domestic hackers are likely to use any national turmoil as a cover for attacks.

Q4: In terms of communications, what messages do people need to hear to retain confidence in the integrity of the election?

Unfortunately, the media as a whole isn’t prepared to deal with election night in an impartial way. Only a minority of the pundits factor in national security implications when they’re discussing political issues. Incendiary statements make for good television ratings but are terrible for the body politic. In previous years we’ve had highly contentious election results, like Kennedy/Nixon and Bush/Gore, which could have led to large civil unrest. Instead of taking the path of conflict, Nixon and Gore chose to protect the nation above their own interests. Their concessions ensured peaceful transfers of power, and their trust in the institution of America reinforced public confidence and headed off significant disorder. Somehow, we need to find voices of reason that can reinforce these lessons. These days, there is a paucity of this kind of statesmanship in the media and in political life. Hopefully, the loudest voices can reach a consensus around what’s best for the country in a non-partisan way.