U.S. Presidential Election: How Trump puts fear in his own party – “Just look at Alabama”

The following article was originally published in Swedish in Dagens Industri and was translated by KARV Senior Advisor Renee Lundholm. 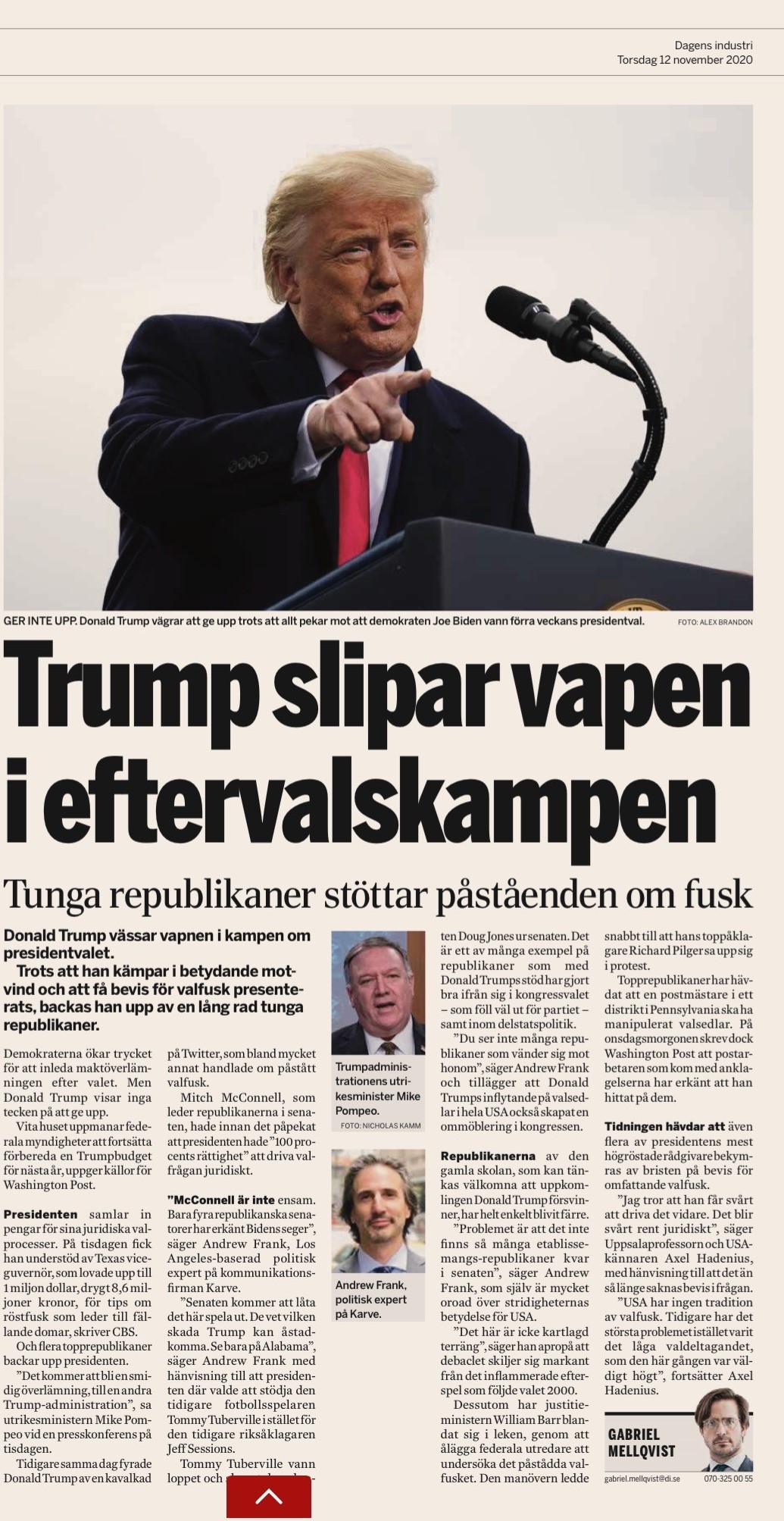 U.S. Presidential Election: How Trump puts fear in his own party – “Just look at Alabama”

Donald Trump sharpens his knives in the fight for the U.S. election.

Although President Trump is struggling against significant headwinds in presenting any evidence of voter fraud, he is nonetheless backed by a long line of heavy-handed Republicans.

The White House is urging federal agencies to continue preparing a Trump budget for next year, sources for the Washington Post reported.

The president is raising money for his legal election battle. And on Tuesday, he received the support of the Texas lieutenant governor, who promised up to $1 million, just over 8.6 million [kronor], for tips on voter fraud that lead to convictions, CBS reports.

And several top Republicans are backing the president.

“It will be a smooth handover, to a second Trump administration,” Mike Pompeo, Secretary of State, announced at a press conference on Tuesday.

That move, in turn, follows a pitch from Donald Trump himself. Earlier that day, he fired off a cavalcade on Twitter, including alleging electoral fraud.

Mitch McConnell, who leads Republicans in the Senate, had before pointed out that the president had a “100 percent right” to pursue the election issue legally.

“The Senate is going to let this play out. They know what damage Trump can do. Just look at Alabama,” said Andrew Frank, referring to the president choosing to support former football coach Tommy Tuberville instead of former Attorney General Jeff Sessions there.

Tommy Tuberville won the race and knocked Democrat Doug Jones out of the Senate. It is one of many examples of Republicans who, with Donald Trump’s support, have done well in congressional elections – which fell well for the party – as well as in American state politics.

“You don’t see many Republicans turning against him,” said Andrew Frank, adding that Donald Trump’s influence on down-ballot races across the United States also created a reshuffle in Congress.

Old-school Republicans, who might welcome the disappearance of upstart Donald Trump, have simply become fewer.

“The problem is that there aren’t that many establishment Republicans left in the Senate,” said Andrew Frank, who himself is genuinely concerned about the importance of the infighting in the United States.

“This is uncharted terrain,” he says, referring to the fact that the debacle differs distinctly from the inflamed aftermath that followed the 2000 election.

To that point can be added that Attorney General William Barr has interfered in the game, by obliging federal investigators to investigate the alleged electoral fraud. That maneuver quickly led to the resignation of his top prosecutor, Richard Pilger, in protest.

Top Republicans have claimed that a postmaster in a Pennsylvania district has manipulated ballots. On Wednesday morning, however, the Washington Post reported that the postal worker who made the allegations has confessed to making them up.

The newspaper claims that even several of the president’s most vocal advisers are concerned by the lack of evidence of widespread voter fraud.

“I think he’s going to have a hard time pushing it forward. It will be difficult legally,” says Uppsala professor and U.S. analyst Axel Hadenius, referring to the fact that there is so far no evidence on the matter.

“The United States has no tradition of voter fraud. In the past, the biggest problem has instead been low turnout, which this time was extremely high,” Axel Hadenius continues.